Not last Thursday but the Thursday before, the first day of this month, at some point in the late afternoon I remembered it was National Novel Writing Month. I once tried to write a novel, but gave up on the fourth draft when I realised it was pants. Since then I have focussed my efforts on very short stories and poetry, and not once considered trying a novel again. But, it appears, if I am anything at all, that thing is whimsical.

Mornings, after tea and teeth cleaning, but before coffee and breakfast, I jump up and down on a trampoline for an hour to eighty minutes. For this I listen to the kind of music I used to dance to in my clubbing days, it makes the time fly past. On more than one occasion I’ve looked at the clock to find three hours have passed. One of the reasons I do this is it helps clear my head for the day. Things that feel like problems before tramping are often entirely resolved after it. It makes me much more efficient. Recently, though, I’ve had a sketch of a story buzzing in my head for the whole time. For a while I quite enjoyed it, but as it’s gone on it hasn’t developed or expanded. The same two scenes: one in my workroom, the other in a beachfront cafe I don’t recognise, play out like a broken movie. I was beginning to feel it was holding me hostage. And my efficiency was slipping.

That Thursday afternoon I think I must have seen an opportunity to get this story out of my head. Fifty thousand words in one month, could I do that? I calculated that that would be about seventeen hundred words a day, every day. Knowing I was unlikely to be able to write every single day of November, I decided two thousand words a day would give me some leeway, but first I had to see if I could do that. So, I tried. I started with the beachfront cafe scene thinking that if I could do two thousand words by the end of the day I’d sign up. I just scraped it before midnight.

Thus, I am now committed to writing fifty thousand words of a novel I didn’t know I wanted to write by November 30. I’ve already had hiccups. There have been two days I’ve written zero words, some days I’ve written fewer than two thousand, yesterday I wrote only seven hundred and sixty eight! But I’ve also twice written just over three thousand, and today I managed four thousand three hundred and twenty two. So I’m just ahead of target. 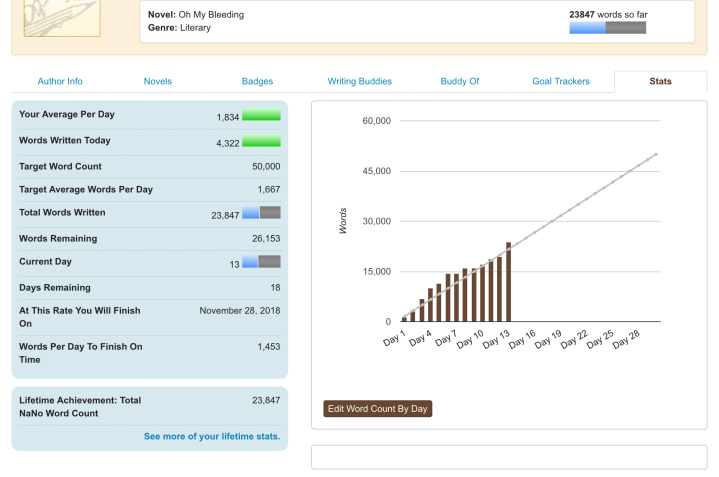 Tomorrow we have friends coming to stay for two nights, but I’m hoping to do an outline of a scene tonight and get as many words down as possible in the morning before trying to straighten up the house, and cook.