I wrote this post last night then forgot to publish it! But that’s fine as I haven’t written anything today, I went to an aunt’s for lunch with my sister, and D braved the big city by himself. I’ll try and resume normal service tomorrow!

Decided to return to Greenwich for a deeper explore, to see inside the Queen’s House, and to walk under the Thames to the other side.  As it’s outstandingly late, and I have to be up early tomorrow, I’m going to let the pictures tell the story. 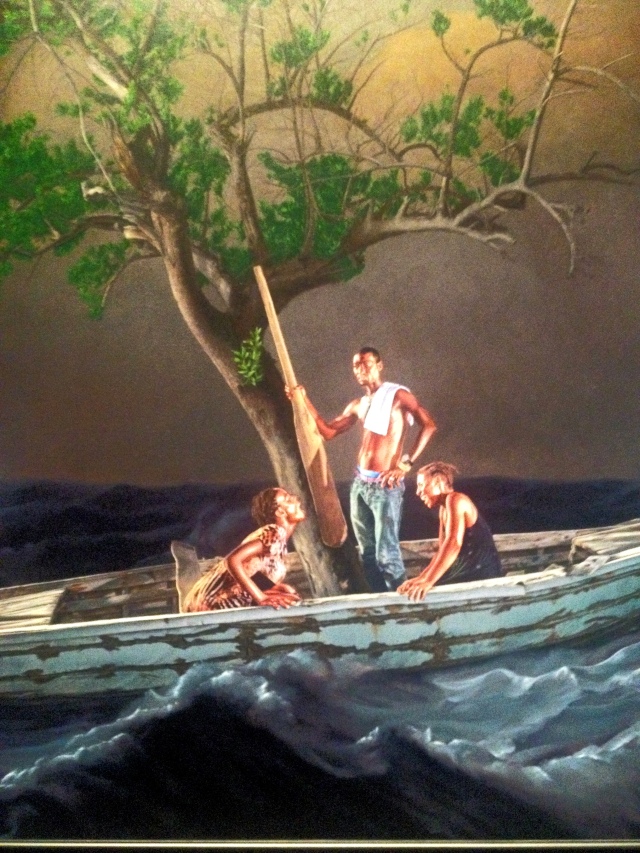 I should have noted the name of the artist*, but didn’t, though I think this was only made last year. I found it one of the most interesting paintings in the collection, it references classical art (this photo is only a small part of the whole), especially, I think, Hieronymus Bosh, to tell of the current plight of migrants. That it was in a room filled with paintings of royalty impressed me massively; kudos to the National Maritime Museum for including it!

We went to a place called Honest Burgers for lunch; I’d forgotten how good a burger can be. After which we walked along the Greenwich foot tunnel to the Isle of Dogs before making our way back home.

*Update: the painting is called Ship of Fools, and is by Kehinde-Wiley. Thanks to blogger and pal Ravenhare for knowing and sharing this info.

**Thanks to Dinah at moreidlethoughts for this.

I am an artist and writer living in southwest Scotland. I freelance as a Literature Ambassador (for Wigtown Festival Co. who run the Scottish Book Town); as a creative writing teacher; and a content provider, populating people's websites and marketing materials with perfectly honed, clear sentences. When I'm not gadding about supporting writers, lit events, businesses, and students I write fiction, non-fiction, and the odd poem. I avidly believe that creativity is the answer to the problem. View more posts