Today’s writing exercise is:
‘Write in a strict form, or, transform prose into a poetic form.’

So I thought I’d try making a mesostic poem (like an acrostic only the chosen word is in the middle) using as the source text a page from one of my favourite books: Knots & Splices, by Cyrus Day, which I found in a second hand bookshop some years ago.

I used a Mesostic Poem generator – I like to call it a Mesostomatic – chose ‘Thanksgiving’ for the spine word in recognition of tomorrow, and because I am grateful for such finds as this book, and got:

I really like the last line. But I decided to have another go, it is quite addictive, and this time put in the phrase ‘A generous plate’, and: 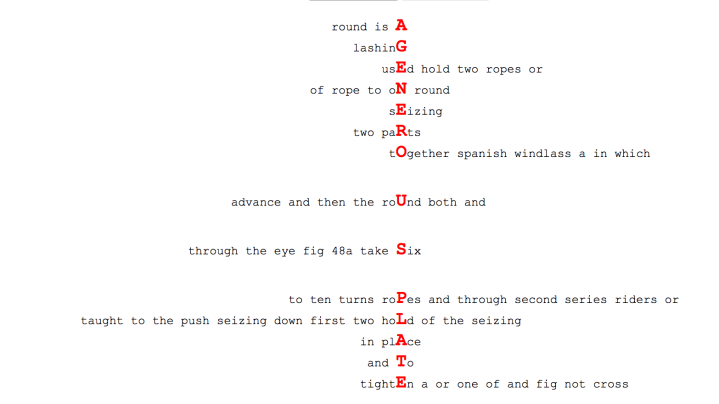 I’m sure you’ll think me incredibly lazy, and I am, but I also spent most of my day on minor admin tasks so the very thought of trying to write a poem in strict form, or any form, sent me reeling. Also, this may not produce art, but it is quite a useful exercise because you can generate some interesting word combinations. Which rather opens your mind to poetic possibilities. And, of course, there are poets out there who have done wonderful things with mesostics, John Cage for one, though he did all the work himself without the help of a mesostomatic.

FYI this was the original text:

The round seizing is a lashing used to hold two ropes, or two parts of the same rope, together.
To “clap on” a round seizing, heave the two parts together, by means of a Spanish windlass (No. 50) if necessary. Splice a small eye in the seizing stuff, which should be well stretched in advance, and then pass the end round both ropes and up through the eye (Fig. 48a). Take six to ten turns round both ropes, and bring the end back through the eye again (Fig. 48b). Heave each turn taught. Lay on a second series of turns, called riders or riding turns, but not so taught as to separate the turns of the first layer. Push the end of the seizing stuff down between the last two turns of the first layer (Fig. 48c).
Take two cross turns, or frapping turns, to hold the turns of the seizing in place, and to tighten them; and secure the cross turns with a clove hitch (Figs 48d and 48e). Dispose of the end by taking three or four turns round one of the ropes, and seizing it with a very small seizing (Fig. 48f), or by securing it with two half-hitches (not illustrated).
A seizing with cross turns but without riders or riding turns is called a flat seizing (not illustrated).